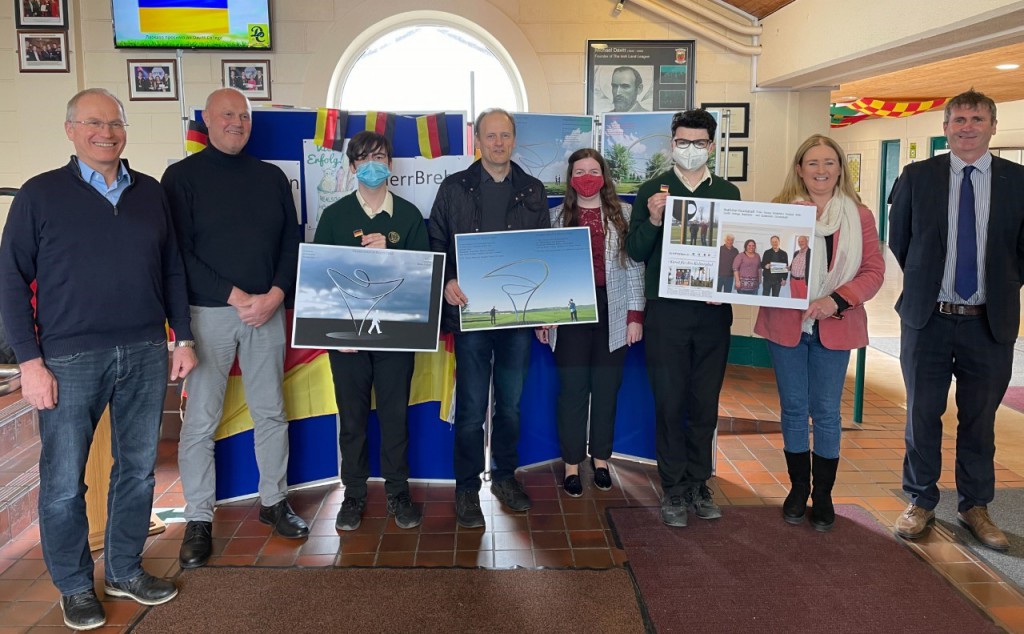 Mayor of Höchstadt Mr Gerald Brehm visits Davitt College accompanied by local Sculptor Cathal Mc Carthy:
There was great excitement in Castlebar  Friday April 1st  when the Mayor of Hochstadt, Mr Gerald Brehm and local Sculptor Cathal Mc Carthy were welcomed to Davitt College by Principal Mr Conor O’Reilly. During this visit, Sculptor Cathal Mc Carthy made an exciting presentation to Mayor Brehm outlining his ideas for his sculpture of Peace -a new sculpture created in collaboration with students from Davitt College and Realshcule Hochstadt, Bavaria. The sculpture is a celebration of the Freundschaft (Friendship) and Partnerschaft (Partnership) that has existed between Castlebar and Höchstadt twin towns since 24th September 2000.
Mayor Brehm who was in attendance with Dr Martin Oberle Environment Advisor for the Erlangen Hochstadt Region who met with German Teachers Annette Newall, Linda Monaghan and Ailish Mc Donagh as well as German language learners.
The idea for the sculpture is for German language students in Davitt College and English language students in Realschule Höchstadt to create short poems ( Elfchen) on the theme of Peace which will then be recorded by the artist and embedded  into a sound activated capsule in the sculpture located in Höchstadt Cultural Mile Park.
Castlebar town is twinned with Höchstadt an der Aisch in Bavaria, Germany.
Since September 2000 there have been several fruitful collaborations and exchanges between the two towns. Following submissions from Castlebar based artists, a deputation from Höchstadt selected Sculptor Cathal Mc Carthy and went to see some of the artists Public Artworks he has created Nationally. In December 2019 Mc Carthy travelled to Germany for a meeting with the Mayor Gerald Brehm and Council representative Dr Eberhard Ranger. There followed a meeting with Mayor Gerald Brehm, Dr Eberhard Ranger, Johanna Blum and Tanya Fischer, English teacher from Realschule Hochstadt.
The Höchstadt Council decided to commission the artist to create a contemporary artwork exploring the theme of “Peace” for their town park in collaboration with the young language learners of sister schools Realschule Höchstadt and Davitt College Castlebar.
The theme of Peace is a particularly important one for Europe. Now more than ever with the current crisis in the Ukraine, is the voice of young people writing and sharing their thoughts and ideas about Peace, an important and invaluable initiative. 2022 is also the European year of Youth. This sculpture would celebrate the twinning of Höchstadt and Castlebar and bring an important focus to the theme of Peace which is much needed in our world today. The completed sculpture will take pride of place in the’ Park of the Cultural Mile’ in Höchstadt. Student voices from Davitt College Castlebar and sister school Realschule Höchstadt would be heard in the park as people come close to the sound activated sculpture.
Davitt College German Department looks forward to being part of this collaborative project!